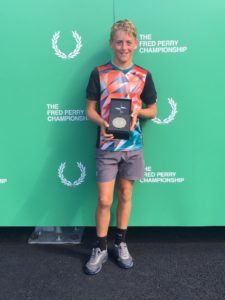 During the weekend of 7th September Daniel Franco-Key played Tennis at The Brentham Club, Ealing, London in The Fred Perry Championship.

He was the winner of the tournament and was awarded £1000 prize to spend on tennis lessons or trips for tennis. He also received a years sponsorship from Fred Perry clothing.