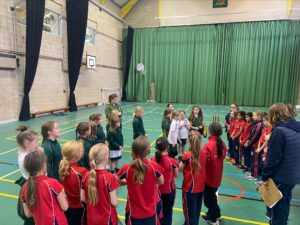 Saint Felix U9 Girls cricket teams showed great promise in an afternoon of indoor paired cricket on Monday in the Sports Hall.

Games took place against visiting pupils from Norwich High School Prep. Play was relocated from outdoors to inside due to persistent rain.

Saint Felix  U9 Gold team had a very close encounter and were winning until the last over when Norwich High bowled a wicket! Player of the match was Philippa Meen and special mentions to Lucy Welch, Isabelle Tallamy, Isabella Reader and Thea Love.

Saint Felix U9 Green team had a steady start to the afternoon but after warming up and getting their heads into the game it became a better performance. This was a learning curve so next time they just make sure to be ready straight from the start. There was some great bowling on show from Imogen Barker-Harrison, Isla Block and Florence Davani-Potts. This was accompanied by some powerful batting from Florence and Lucy.

Overall, I was delighted with both teams’ performances. Their understanding of fielding improved throughout the match and their batting and fielding reaction times also quickened. Their accuracy developed through the game and the girls’ urgency to send the ball to the wicket also grew! Both teams made some good decisions when batting and fielding, and I look forward to seeing this further develop in the future.

Over the summer break I would really encourage the girls to participate in cricket camps and clubs where possible – they have so much potential! Jade Wong, Head of Saint Felix Preparatory Department

Enquire now for places in 2022