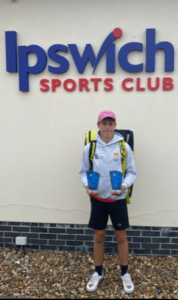 Daniel Franco-Key spent most of his summer travelling playing tennis.

From Edinburgh to Cheltenham in Grade 2 tournaments. Then Wimbledon, to Nottingham playing National Finals. Tough, well fought matches of the highest level. Then finishing up in Ipswich for the County Closed where he was successful in winning the U16 Singles’ and Doubles’ and was runner up in the U18 Singles’.

Daniel’s sister, Lucia, has been successful in being selected for the Suffolk County Netball Squad.