Dedication to Ancient Greek by Sixth Formers Kiara and Polly 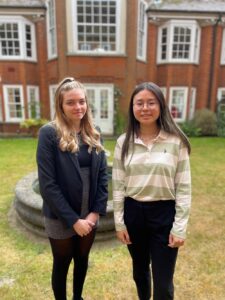 Sixth formers, Polly Chan, Yr12 and Kiara Jessop, Yr13, have shown remarkable dedication and resolve by studying the rare subject of Ancient Greek in addition to  their A Level study.

Polly and Kiara were so inspired by their studies of Latin and Ancient History that they decided to undertake a GCSE in Ancient Greek in their own time; from learning the alphabet to translating 2500-year-old poetry. The whole GCSE was taught outside of school hours and was completed in less than 9 months despite the qualification normally needing three years to complete.The girls completed the entire qualification earlier this month, sitting three papers including a paper on Homer’s Iliad and Herodotus’ Histories.

Polly and Kiara joined Saint Felix at different times – 2014 and 2017 respectively – and formed a firm collaboration because of their mutual love of the ancient world and Latin, which they both intend to study at university. Polly, a gifted musician, was a member of Aldeburgh Young Musician and the North Suffolk Youth Concert Band who took part in the Southwold Arts Festival aged 12 in 2018. Kiara joined the school as an academic scholar. Both pupils have studied Ancient Greek alongside their A Levels in Ancient History and Latin.

Commenting on the decision to teach herself Ancient Greek at GCSE level whilst studying alongside her A levels, Polly said:

I really wanted to try to learn Ancient Greek along with Latin as I intend to study Classics at university. Greek is harder than Latin and so it was a difficult journey to complete the course so quickly. I feel grateful to have had so much support from my two teachers who have given up their free time to help us get to the end.

Latin is taught at the school from Year 6. Ancient History is also a popular option at A Level. Many Saint Felix scholars have gone on to study classical related subjects at degree level.

Headmaster James Harrison is himself a keen scholar of the ancient world – with a particular passion for Roman history. His love of the subject has clearly inspired many pupils.

Having taught Polly and Kiara for many years I am not surprised by their dedication and achievement. These two pupils have shown great commitment to complete such an arduous task in going from beginner to top grade in such a short space of time. What is most remarkable is that both girls have very busy timetables and yet found the time to attend lessons in the evenings and weekends with a large proportion of their qualification acquired through self-study.