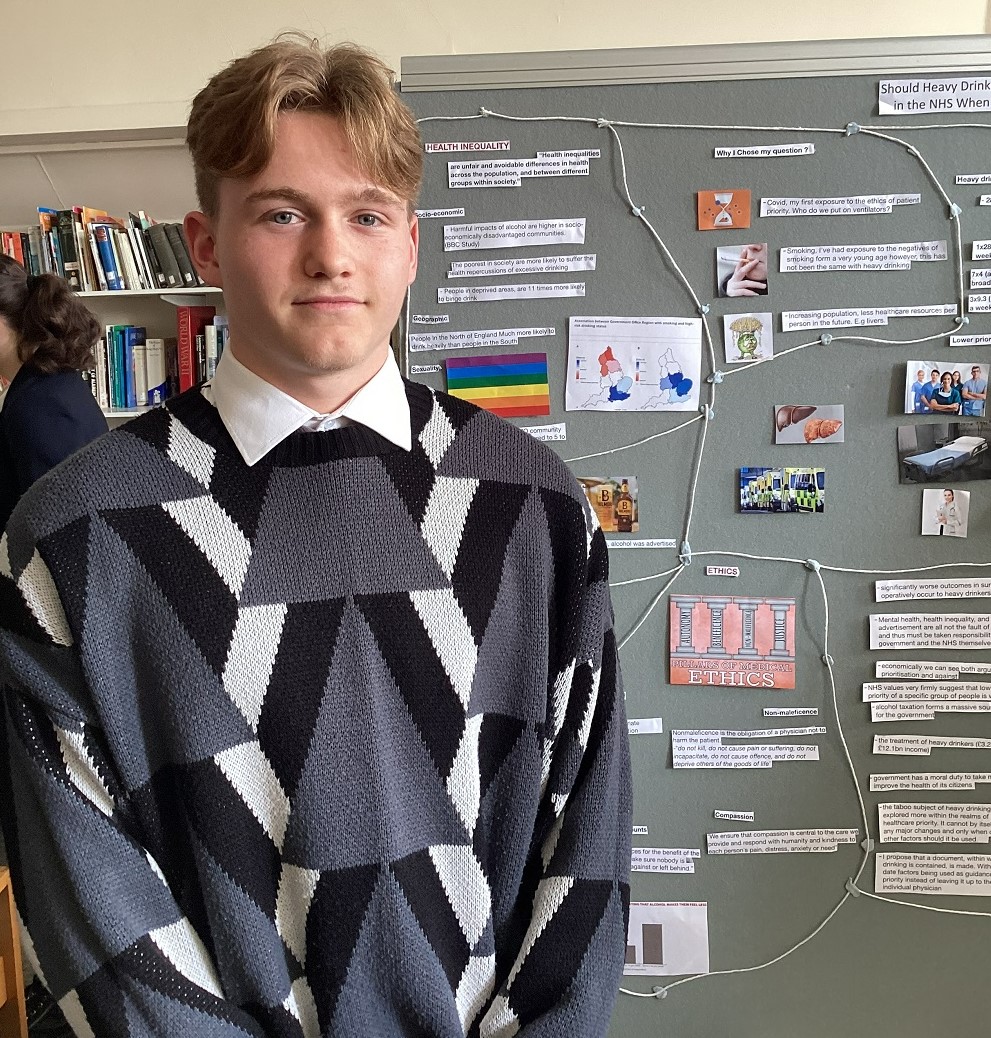 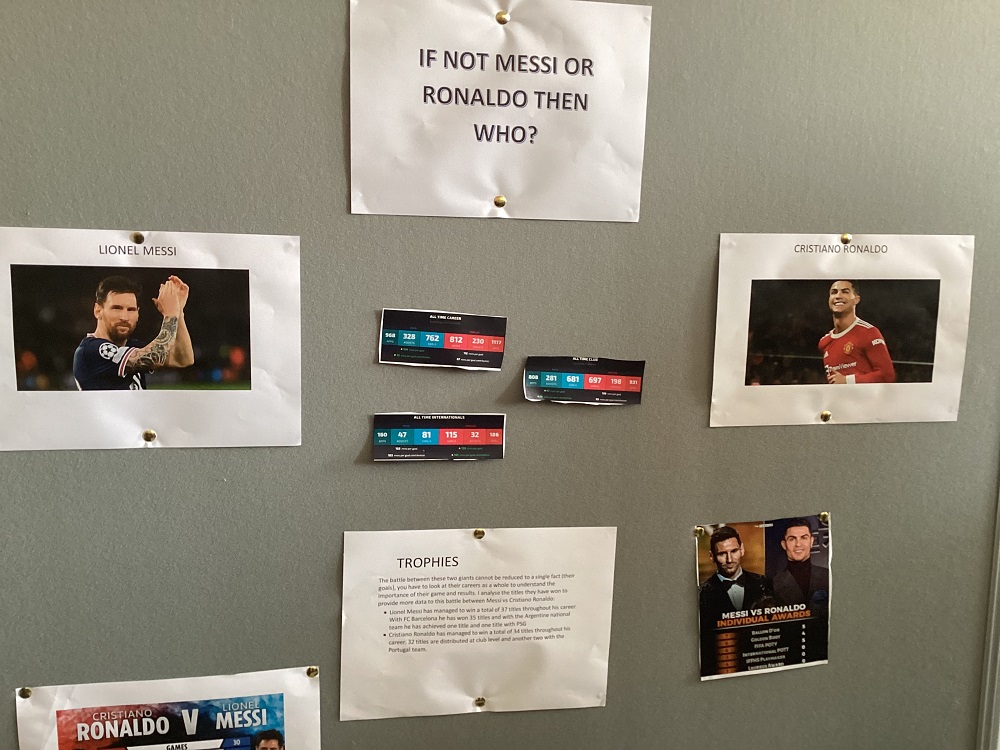 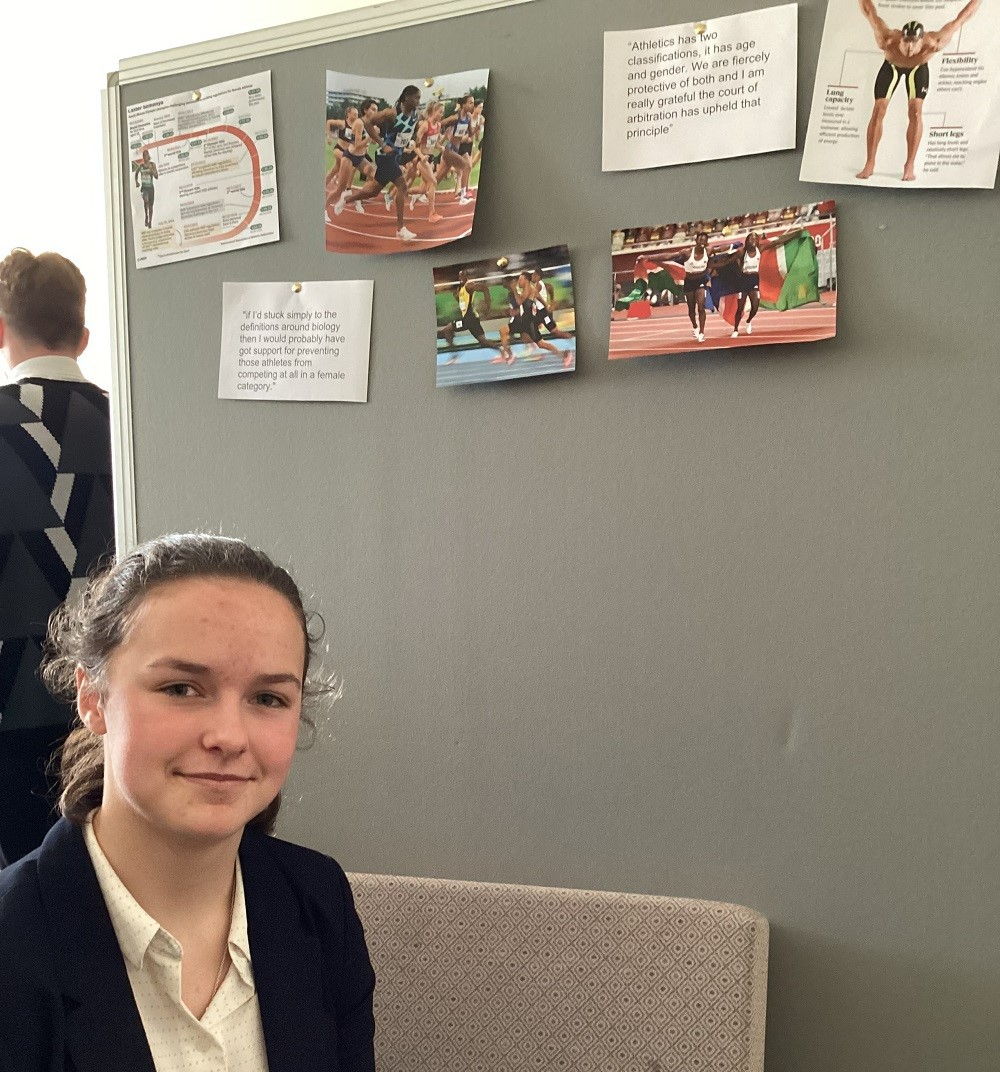 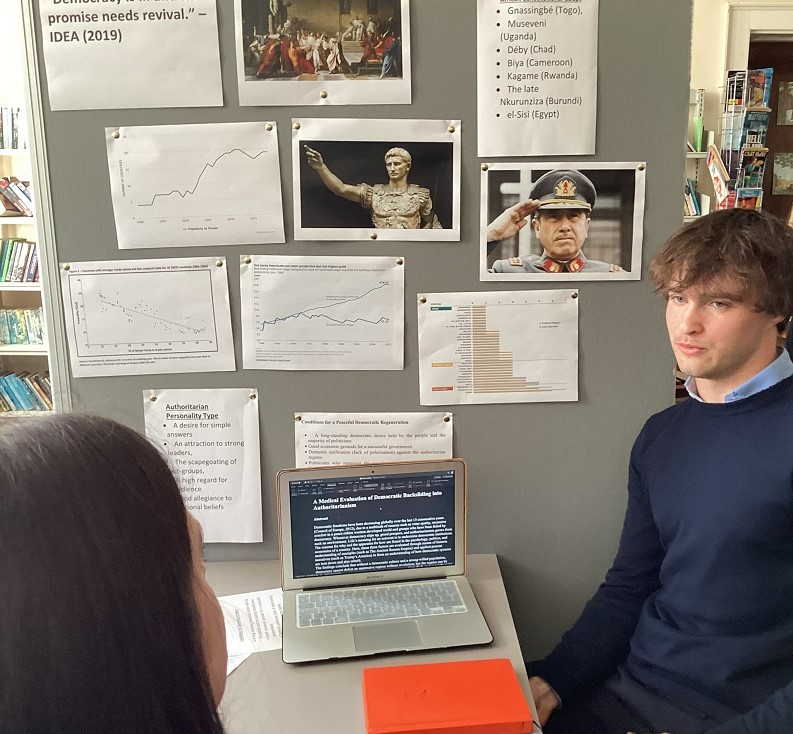 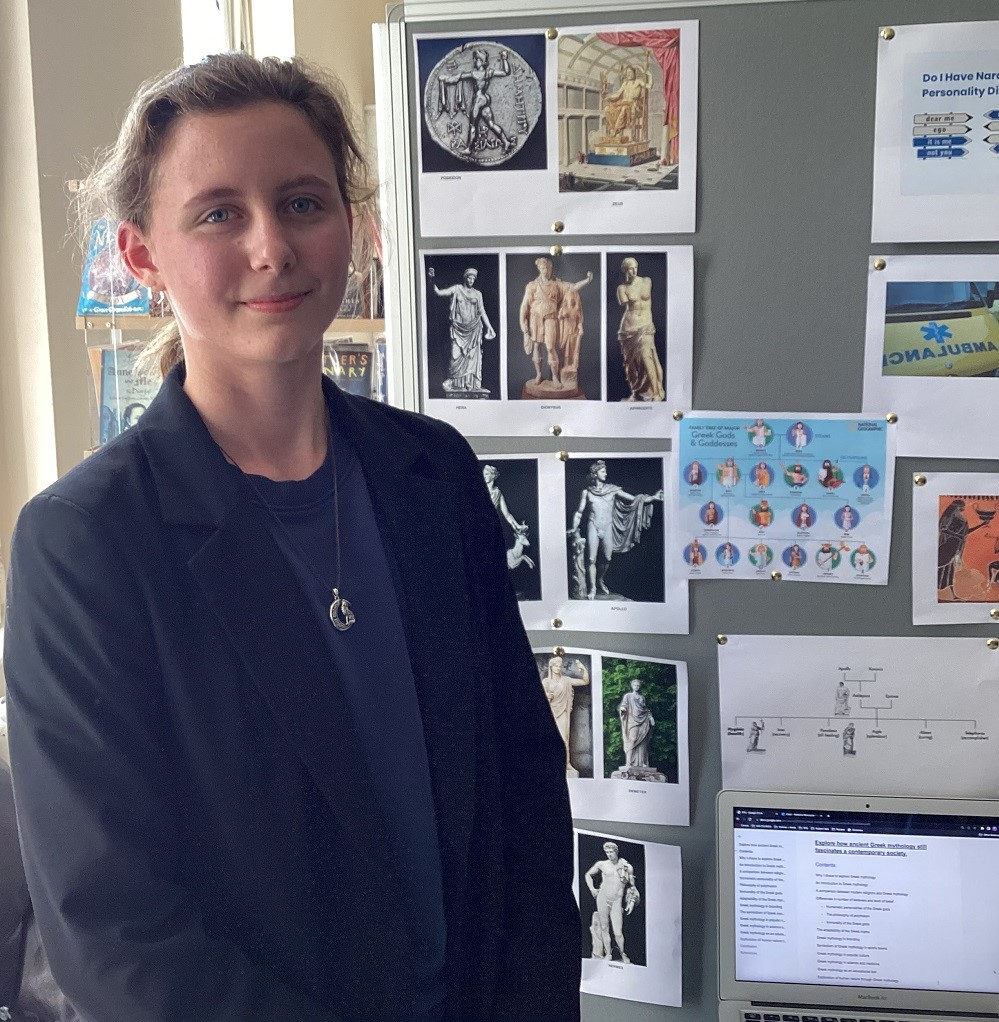 On Tuesday afternoon this week, some of our Year 12 pupils had the chance to talk about their individual projects for the Extended Project Qualification (EPQ) with staff from across the school, for their final assessment.

Part of the EPQ requirement is for students to talk about, and answer questions on their areas of interest to a non-specialist audience. Staff from all areas of the school were invited to come and listen to each pupil who stood beside individual “trade stand” style displays with visuals and word maps about their projects. Pupils, Liberty-Moon Hallaq, Marcus Moscuzza, Senad Kalaci, Brooke Oram, Natasha Moscuzza and Joab Carr gave their presentations in the Library.
Liberty hopes to study Medicine and was interested to find out why there has been such an apparent growth in allergy sufferers. Liberty focused on nut allergies, interviewing family members and peers plus conducting research via books and online scientific resources.
Marcus, another candidate for Medicine had researched health problems caused by addiction – eventually focussing on alcohol and the impact of this on the accessibility of scarce NHS resources. Marcus is particularly interested in the field of medical ethics as well as the political, social, and economic aspects around the subject.
Senad is taking three science subjects at A level and had decided to study something completely different: the contrasting ways in which popular sports players make use of their fame. Senad pitched Leo Messi against Cristiano Ronaldo to look at the ways in which each player helped charities and made best use of their popularity to gain lucrative sponsorship.
Brooke aims to study Sports Science and had observed the ways in which the International Athletics Federation (IAF) have adapted their approach to trans players in response to ongoing research. Particularly with regards to the impact of hormones on the performance and their being allowed to compete.
Natasha’s project asked the question: Narcissism – do I suffer from it? The subject worked well with Natasha’s keen interest in Greek mythology and ambition to study Psychology. Many psychological terms derive from Greek myths and many high-profile brands like Starbucks and Versace have made use of mythological characters such as Medusa for their logos.
Joab had researched democracy and the different notions of “free society” – looking at the ways in which cultural norms can be affected by changing political landscapes. Joab had come to the idea without bias and had read arguments from all sides – taking a mathematical and philosophical approach.

“All of the pupils shared their projects with impressive enthusiasm and articulacy. Taking the EPQ has given them great insight into the academic research process and the ability to use techniques such as Harvard referencing system, which will stand them in good stead as they progress to Higher Education.”

Mrs Joahnna Harlock, Head of Sixth Form
In addition to presentations, pupils have submitted a 5000-word essay, an artefact or media for the EPQ. Post-event feedback from attendees will inform final assessments.
The EPQ is equivalent to an AS qualification and can affect the offers from universities.

Find out more about our Sixth Form Department curriculum