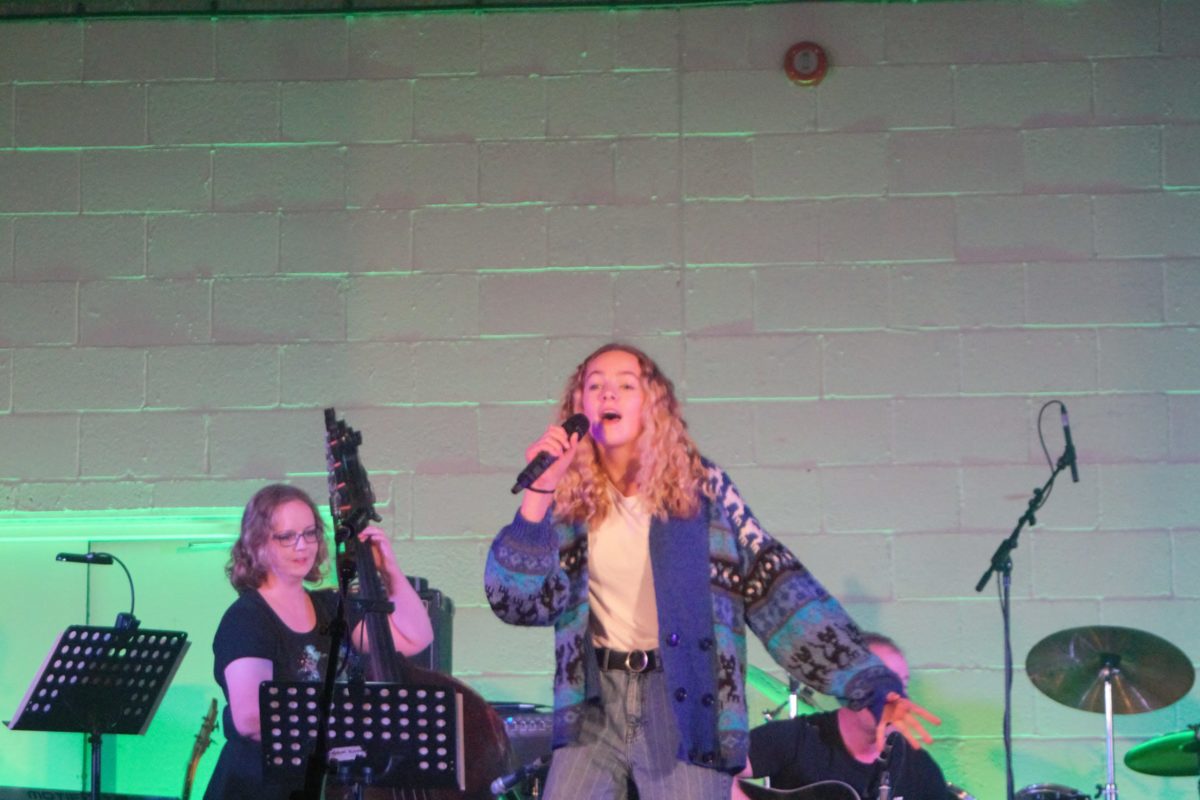 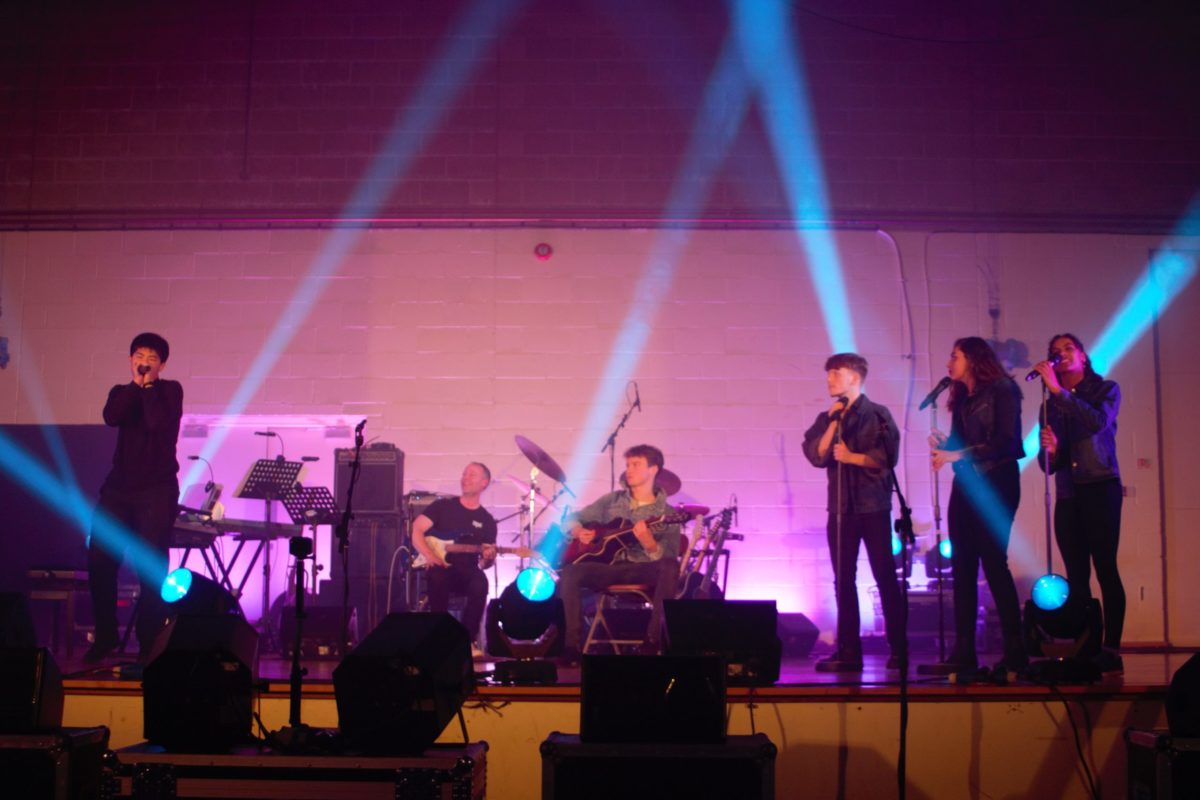 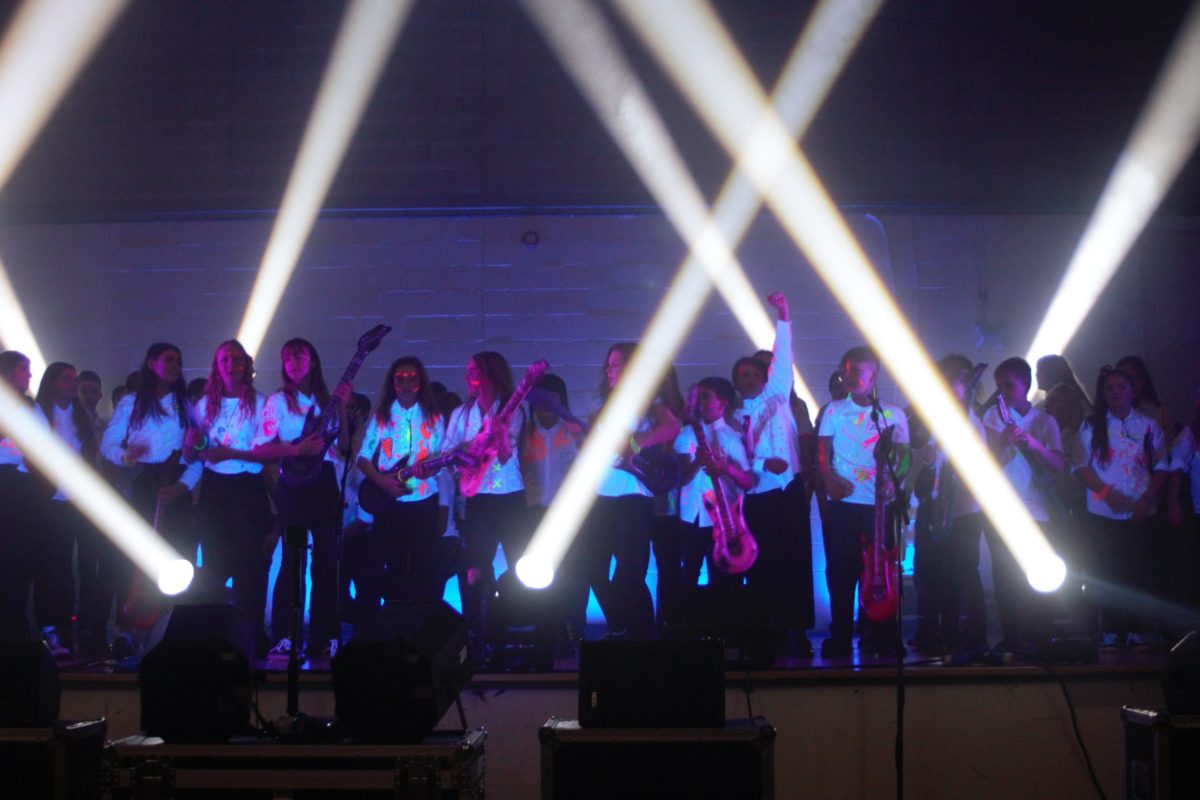 The ‘House Shout’ is one of the biggest nights of the year at Saint Felix for students and parents alike. Pupils from the Senior Department aged between 11 and 18 from each of the four Houses perform as individuals and in small groups, and the contest culminates with a whole-house choreographed singing performance.

Points are awarded at each stage, with the prestigious trophy awarded to the house with most points at the end of the evening.

Master-minded and compèred once more by Noel Vine, with his trademark flair and panache, all the performances this year followed the theme of ‘Best of British’, giving plenty of opportunities to present ‘hits’ from the 1970s through to the last 10 years. The solo and ensemble pieces were accompanied live by Saint Felix School’s very own four-piece band, ‘Black Lettuce’, made up of staff from the Music Department with Year 12 pupil, Joseph Devonshire, in what is hoped will be the first of many successful appearances.

Best solo performance was won by Imogen Whyte for Edmond House, with a delightfully idiosyncratic rendition of soft-rock band Fairground Attraction’s 1980’s number, ‘Perfect’. Edmond House also triumphed in the ensemble round with a lively performance of ‘Wonderwall’ by Oasis, sung by Smriti Gokarn, Nathaniel Hurst and Natalie Sanford accompanied by Joab Carr on guitar and featuring a stunning display of Beatboxing by the latest Pop Superstar of Saint Felix, Samuel Gao. In the House Shout round, where every member from Year 7 to Year 13 in each house performs in a song and dance routine, Pemberton triumphed with a witty version of Elton John’s ‘I’m still standing’, showcasing Cameron Hodds’ talents as a jacket-hurler and, in a final heart-stopping set piece, a perfectly executed basket-toss.

After totting up the results of each round, Edmond House was declared the overall winner, for the first time in 16 years! Expert guest judge, Andrew Quartermain, CEO of the Pro Corda Trust based at Leiston Abbey, was judicious in his comments on every performance, offering suggestions for achieving even greater things in the future, but was full of praise for all the performers, expressing his admiration for the high standards maintained throughout. He commented particularly on the ‘extra spice’ added liberally to Pemberton’s House Shout, giving it just the edge over its close competitors and leading to its reprise by popular demand at the end of the evening.

Headmaster James Harrison said: “Once again, House Shout has proved to be one of the highlights of the Saint Felix school year. Demonstrating the inclusiveness that we wholeheartedly encourage. It is always wonderful to see pupils supporting each other and working together to create some real show-stoppers. We work hard to ensure that all pupils get many opportunities at school to enjoy the performing arts, whether or not they are formally studying them at GCSE or A Level. This kind of enjoyable, shared activity is far greater than simply an opportunity to perform: it enhances pupils’ self-confidence and feelings of self-worth and promotes resilience and a sense of belonging.”

Look out for the Gilbert and Sullivan classic, ‘The Pirates of Penzance’, coming up at the beginning of May 2020, followed by the evergreen ‘Little Shop of Horrors’ at the end of June 2020.