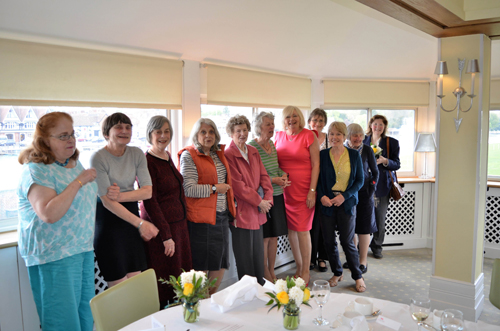 On the 12th April 2017 a splendid lunch for Old Felicians took place in a private dining room overlooking the river at the renowned Leander Club at Henley-on-Thames. Guests were warmly greeted from noon with a glass of Leander pink champagne and canapés and after Fran D’Alcorn said the Old Felicians’ Grace which had been specially composed by Canon Fitch, Chaplain of Saint Felix School from 1951-1970, a delicious lunch followed starting with fresh English asparagus, then duck marinated in honey and thyme and ending with Eton mess. The table floral decorations of yellow and white flowers echoed the school’s colours and before each place setting was an individual posy of sweet smelling hyacinths and yellow roses tied in a green ribbon on which was printed in gold the school’s motto: Felix Quia Fortis.

The event had been efficiently organised by Rosemary Scott and many thanks are due to her for making it such a very special occasion. OFs had travelled from Suffolk, West Midlands, Hampshire, Gloucestershire, London, Berkshire, Dorset and Lancashire to renew friendships and remember years spent at Southwold. We were particularly pleased that Phoebe Lloyd was able to come as she had been at school during the war years, first at Tintagel and then Hinton St. George and was then recruited to work at Bletchley Park, we were fascinated to hear her stories.