Triumph for Aaliyah at Gymnastics competition 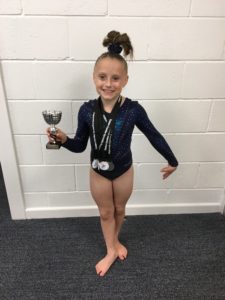 Aaliyah Manning has been very successful during recent Gymnastics events

At the British teams competition, she was placed 4th in Great Britain in the Under 12s; she was only 0.05 points away from 3rd place. The three gymnasts who finished above her are Aaliyah’s National Squad teammates who are all a year older. Aaliyah also competed in the Suffolk Championships during the weekend 21st September, where she was crowned Suffolk Champion for the 4th year running at the highest level for her age.

On Sunday 29th September she competed in the Eastern Counties competition in age voluntary levels, where she was crowned East Region Champion. She was also 1st place on bars, beam and floor and 2nd place on vault. The top 4 gymnasts make the East Team and will represent the region in the National finals, as well as competing as an individual. Placing 1st means she gets to lead the East team and once again compete for National Squad selection for 2020.